Manchester United Football Club take on Norwich this weekend, with Louis van Gaal absolutely desperate to register a win at home, and appease some of the fans tensions. His task has been made slightly easier, with a few key players returning from injury.

Wayne Rooney will return in the #10 role, with Memphis Depay and Juan Mata providing width alongside him. Anthony Martial will continue as the sole striker.

A midfield duo of Morgan Schneiderlin and Marouane Fellaini provides plenty of defensive ability, whilst offering a combativeness which has been lacking due to Bastian Schweinsteiger’s absence.

Another returnee is Phil Jones who was on the bench away at Bournemouth last weekend, he’ll partner Daley Blind at the heart of defence. Ashley Young comes in at left-back, with Guillermo Varela once again playing at right-back. David de Gea obviously starts in goal. 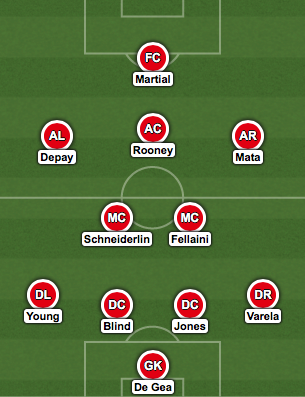 Manchester United have lost four from their last five. The pressure is starting to mount on Ole Gunnar Solskjaer. The Red Devils simply have to bounce back with a home victory against West Ham United […]

Manchester United head to West Brom in just six days time now, and Louis van Gaal hopes to have a few of his defensive recruits back at his disposal for his trip to the Black […]

Manchester United’s season has been a forgettable one. Things are now winding down to a close, though, with just two games remaining. For Ole Gunnar Solskjaer it’s already about building for next season. The club […]