Manchester United take on Manchester City for the first time of the season this coming Saturday, with Jose Mourinho and Josep Guardiola fuelling a rivalry which began out in Spain. Ahead of the game, we’ve decided to take a look at the best possible line-up.

Obviously, David de Gea will get the nod in goal. He’s one of the best goalkeepers on the planet and provides a good starting point for our line-up.

Onto the defence, and this area of the field has improved massively recently. On the left-hand side we have Luke Shaw, who has been playing brilliantly since his return from that lengthy injury. Next to him we have Daley Blind, who is forming a wonderful partnership with Eric Bailly at the heart of our defence. Antonio Valencia makes up the back four.

Onto the midfield duo – and Paul Pogba will obviously start. The marauding Frenchman has to have an excellent game this weekend to really stamp his authority on this league. In the defensive role, Marouane Fellaini has to start.

The front four is where things get interesting as Jose has options aplenty. Anthony Martial will likely keep his place in the XI solely down to his pace, and on the right we have Henrikh Mkhitaryan, who shown us all his capabilities against Hull City in a 20-minute cameo. 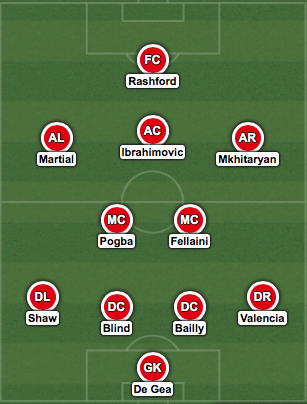 Choosing a Manchester United Team of the Decade seems to be the in-thing at the moment. I guess we’re coming to the end of a mixed ten years for the Red Devils, so picking this […]

The Manchester derby is fast approaching, with United currently sitting one place and a solitary point above their local rivals City. Finishing third would be a good end to an topsy-turvy season for the Red […]