Manchester United Football Club has looked excellent in European competition this season. Jose Mourinho really has the Reds playing the way that United should, and long may that continue. Next up, an away trip to Switzerland where they’ll play FC Basel.

Qualification and top spot in the group will be confirmed with a victory here, and that’s exactly what Mourinho will be going out to do. Despite that, I expect to see a slightly weakened team deployed by the manager, because it’d take a miracle for us to be dumped out of the competition at this point. 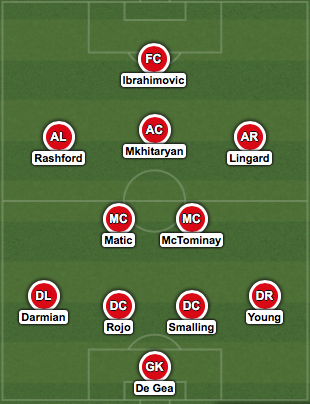 David de Gea should remain in between the sticks, but I imagine every other place in the team is up for grabs. I expect Ashley Young to start at right-back, with Matteo Darmian coming in as the left-back. Chris Smalling will play, as will Marcos Rojo, making his return from injury.

Nemanja Matic has been the rock at our midfield base, and with him in the team, United should always win that midfield battle. Scott McTominay should be brought into the team as his reputation continues to grow. Henrikh Mkhitaryan didn’t play at the weekend, but this could be a good game to bring him back in.

Zlatan Ibrahimovic hasn’t started a game since April, this could be his big opportunity. Marcus Rashford and Jesse Lingard make up the starting XI.


About Jordan Street 12892 Articles
I'm a 25-year old aspiring writer and I created the blog as a platform to discuss all things Manchester United. Season Ticket holder block E332.
Website

Manchester United Football Club are struggling at the moment. Jose Mourinho’s men are seemingly already out of reach in terms of winning the title, while at this point, a spot in the top four is […]

Manchester United’s final Premier League game of the season is here. Jose Mourinho’s men host Crystal Palace in a fixture that takes place just four days before the biggest game of our campaign; the Europa […]

Manchester United head South to take on the current league leaders and probable champions come May, Chelsea. Mourinho’s men have been winning games without playing all that condignly of late, and United will certainly fancy […]