Manchester United’s games are coming thick and fast now, with Jose Mourinho’s side still fighting for a place in the top four as well as Europa League glory. For now, attentions are firmly on continental competition, with the Red Devils hosting Anderlecht.

Before what is arguably our most important fixture of the season to date, we’ve tried to work out what starting line-up the manager will go for.

In goal, Sergio Romero will come back into the mix as he’s been our cup shot-stopper. On the whole, he’s done superbly. In terms of centre-backs there is literally no other alternatives to Eric Bailly and Marcos Rojo right now as both Chris Smalling and Phil Jones are injured. Luke Shaw deserves another chance in the setup, so he’ll play as left-back with Antonio Valencia making up the back line.

Ander Herrera was supreme against Chelsea so he has to continue, I can see Michael Carrick brought into the team for that extra bit of composure. Paul Pogba will play just in front of these two guys, in a more offensive role.

Anthony Martial, Zlatan Ibrahimovic and Henrikh Mkhitaryan were all rested against Chelsea, so these guys will be feeling fresh and ready to go. Goals at home have been our biggest problem, so an early strike here could set the tone for the rest of the game.

Have a look at the full starting XI here: 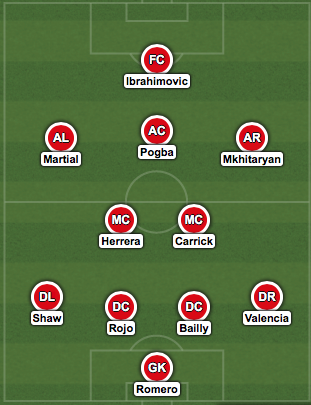 About Jordan Street 13311 Articles
I'm a 25-year old aspiring writer and I created the blog as a platform to discuss all things Manchester United. Season Ticket holder block E332.
Website

Manchester United’s place in the Europa League knockout stages is already secure – though the Red Devils still have a little work to do in order to ensure they top the group. Their fifth game […]

Manchester United football returns in just a few days, as the Theatre of Dreams plays host to one of the biggest games of the season; Manchester United vs Liverpool. Louis van Gaal had a good […]