Manchester United have had a habit of not backing up big wins this season, but they’ll have a chance to put that right this weekend against Everton. This game is simply a must win if the side are to finish in the top four, and hopefully grab a Champions League berth.

Ahead of that game, we’ve decided to have a look at the starting XI, and its a strong one – injuries permitting of course.

David de Gea obviously gets the nod in goal, with the usual back two of Daley Blind and Chris Smalling in front of him. Marcos Rojo will be the starting left-back, and Matteo Darmian will play on the right flank.

In front of the back four will be two of the best holding midfielders in the game – Morgan Schneiderlin and Michael Carrick. However the front four is where it gets really interesting. Ander Herrera will play as the attacking midfielder, with Jesse Lingard and Anthony Martial either side of him. Marcus Rashford once again deserves to lead the line. 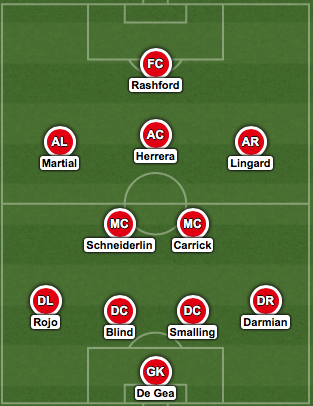 Manchester United earned a vital point against Chelsea on Sunday, after Robin van Persie scored a 94th minute leveller at home to the probable Premier League winners. Next up – Manchester City and Manuel Pellegrini. […]

Manchester United have one more game before the international break, and despite some poor results of late, Louis van Gaal’s side sit jus four points away from a top four spot. Encouraging performances against Chelsea […]