David de Gea will obviously continue in goal, with Chris Smalling partnering Marcos Rojo at the heart of defence. Daley Blind has looked extremely tired recently and a rest will do him good. Guillermo Varela will play as the right-back, with Matteo Darmian starting on the left.

Morgan Schneiderlin will come back into the fold alongside Ander Herrera, and the front four is where it gets interesting. Juan Mata will be fresh after his sending off at the weekend so he’ll start as the #10 with Memphis Depay and Anthony Martial either side of him. Marcus Rashford will lead the line.

Check out the XI below: 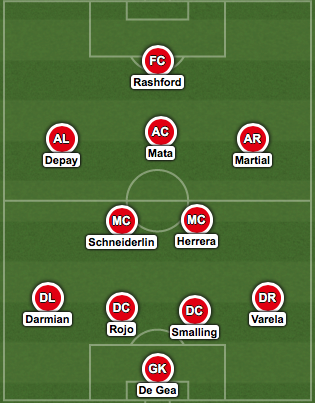 Manchester United’s barron spell has been hard to watch over the past few weeks, with Louis van Gaal doing too much tinkering that outwitted himself from time-to-time, leaving Robin van Persie, Wayne Rooney and Radamel […]