Manchester United lost last time around against Tottenham Hotspur, but Louis van Gaal won’t have too long to reflect on that, with an FA Cup quarter-final replay against West Ham this coming Wednesday; With a semi-final at Wembley up for grabs.

The starting XI will probably have a few changes from the side that lost at Spurs, just to freshen things up at least.

David de Gea will start in goal with the usual back two of Chris Smalling and Daley Blind in front of him. Matteo Darmian will come into the side as the right-back, in place of the injured Tim Fosu-Mensah. Marcos Rojo will stay in the side as left-back.

Morgan Schneiderlin and Ander Herrera will be the midfield duo, with Michael Carrick dropping to the bench. Juan Mata will start in a more familiar #10 role with Jesse Lingard moving back to the wing. Memphis Depay will come in to allow Marcus Rashford a rest, with Anthony Martial as the lone striker. 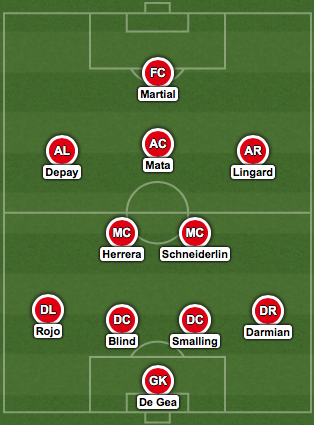 Manchester United’s participation in the International Champions Cup continues with a huge game against FC Barcelona. The Red Devils are undefeated on pre-season tour thus far, and once again, they’ll pit their wits against one […]

Manchester United simply have to win tomorrow night, in one of the toughest stadiums in world football to go to at the moment. Louis van Gaal takes his side to Wolfsburg, with his squad severely […]