Manchester United’s season hinges on safe progression into the FA Cup semi-final later this evening, as well as Louis van Gaal’s position as manager being on the line. However the game against West Ham will not be easy, particularly away from home.

After the poor performance last time out, there will definitely be at least a few tweaks in terms of team selection. The first of which will see Marcos Rojo drop out after a string of poor performances, which could well see Guillermo Varela come back into the side in the right-back slot.

Morgan Schneiderlin has been excellent recently, and he seems to be forming a nice partnership with Michael Carrick in the middle so they both have to play.

Juan Mata should return to the #10 role, with Memphis Depay getting a rare start in the absence of Marcus Rashford. Anthony Martial leads the line. 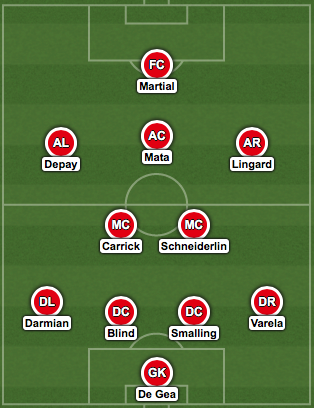 
About Jordan Street 13505 Articles
I'm a 25-year old aspiring writer and I created the blog as a platform to discuss all things Manchester United. Season Ticket holder block E332.
Website

Manchester United currently sit top of the Premier League for the first time in over two years, and my it feels great to be back at the summit. That stay could be short-lived however, and […]

Jose Mourinho’s Premier League Old Trafford bow is here. The self-proclaimed Special One is ready to walk out of that famous tunnel for the first time in a competitive game as our boss – and […]

With the title conceded, the pressure should be off Manchester United Football Club. With five games remaining, we’ll hopefully see our Red Devils play with a newfound freedom. Next up, a potentially tricky trip to […]