The real stuff starts now. Jose Mourinho’s first competitive game as manager takes place this coming Sunday, and what a match we have in prospect. Manchester United will be looking to kick things off with a solid three points, and we’ve tried to decipher the team to do that.

Mourinho will go as strong as physically possible, despite Chris Smalling being missing through injury, and you’d imagine it is highly unlikely that Paul Pogba will play as he has only just signed.

David de Gea will start in goal, and he’ll have the usual back four of Luke Shaw, Daley Blind, Eric Bailly and Antonio Valencia in front of him. Marouane Fellaini will continue as one of the holding midfielders, but I reckon Morgan Schneiderlin could come in to give us added protection.

Wayne Rooney will start in the #10, with Anthony Martial and Jesse Lingard either side. That means no place for new man Henrikh Mkhitaryan which is a shame, but you simply cannot drop Lingard after an excellent performance at Wembley. Perhaps Martial’s place is in danger, though? Zlatan Ibrahimovic will start as the sole striker. 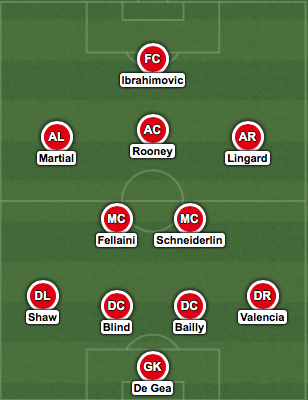 Manchester United Football Club are going through a tough time of things at the moment, with Jose Mourinho’s men coming into the second derby of the season fresh off the back of a 4-0 thumping […]

Manchester United head South to take on newly promoted Watford this weekend, after a two-week break due to the international break. Louis van Gaal will be hoping to kick the hectic winter period off on […]

Manchester United and Champions League football is a great combination. Things get underway this Wednesday, when the Red Devils head to Berne to take on Young Boys. Jose Mourinho will be hoping to kick things […]