Manchester United’s move for Jose Mourinho looks to be close, with the club clearly trying to start the summer off with a huge statement of intent. The self-proclaimed Special One will have his own ideas and tactics, and for that he’ll be bringing in players who fit his system.

We’ve already been linked with a few names, so we’ve decided to draw up a potential starting line-up for the 2016/17 campaign under the self-proclaimed Special One – and one things for certain, it’ll leave you salivating in excitement.

In goal we have David de Gea, with a fully fit Luke Shaw back in the mix which is exciting in itself. Alongside him we have our first possible new acquisition in the form of John Stones. Chris Smalling and Matteo Darmian will make up the back four.

Morgan Schneiderlin will be a revitalised player under Jose Mourinho, as will Ander Herrera. The pair will form a dynamic midfield duo.

The front four is where things get really exciting. Wayne Rooney will be in the team at the #10 slot, with Anthony Martial out on the left. The last two spots in the team will be new signings – Alvaro Morata will use his pace out on that right-hand side, with the main man Zlatan Ibrahimovic leading the line. 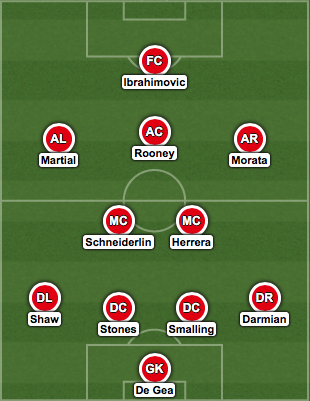 About Jordan Street 13739 Articles
I'm a 25-year old aspiring writer and I created the blog as a platform to discuss all things Manchester United. Season Ticket holder block E332.
Website

Manchester United Football Club returned to winning ways over the weekend, with a much-needed victory at home to Brighton. Next up, a tricky trip to high-flying Watford on Tuesday. This game will not be easy. […]

Manchester United’s 2-0 victory over Chelsea was certainly one of our most impressive performances in recent years, with the Red Devils playing sublime for 90 minutes. Jose Mourinho certainly would have been thrilled to get […]

Manchester United’s attentions turn to Thursday night football and the Europa League. Jose Mourinho’s men will be looking to get back to winning ways after a disappointing defeat in the Manchester derby at the weekend, […]