Manchester United have confirmed Jose Mourinho as their new manager, with the Portuguese coach already beginning work. With the European Championships looming, that gives the former Chelsea boss some time to work in the transfer market and mould his squad.

Ahead of that, we’ve decided to take a look at a probable starting line-up that we could see next season. First and foremost, he loves to play in a defensive 4-3-3 system with plenty of pace on the counter.

In goal we have David de Gea, and in front of him is the first of his potential signings – John Stones. Chris Smalling, Luke Shaw and Timothy Fosu-Mensah make up the rest of a young back four.

Onto the midfield, and Morgan Schneiderlin will protect the back four. He’ll have Wayne Rooney and Ander Herrera in front of him. This trio will provide the perfect blend of pace, defensive diligence and ability.

The front three is the most exciting. Anthony Martial and Marcus Rashford will provide plenty of speed on the wings, with Zlatan Ibrahimovic as the figurehead of a youthful side. 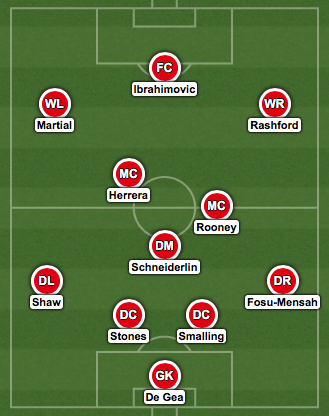 
About Jordan Street 13575 Articles
I'm a 25-year old aspiring writer and I created the blog as a platform to discuss all things Manchester United. Season Ticket holder block E332.
Website

Manchester United football returns this weekend, with Jose Mourinho’s first game in charge coming against Wigan Athletic. Ahead of the big kick-off, we’ve decided to take a look at a potential XI that could be […]

Out of nowhere, Manchester United have the chance to make it four away wins in just nine days. Three points here could see the Old Trafford club move as high as fifth with other results […]