Manchester United will have completely transformed by the time August comes around, with Jose Mourinho already putting his own stamp on the current squad. The self-proclaimed Special One still has plenty of work to do, but his squad is taking shape nicely.

In goal, David de Gea will obviously get the nod, and he’ll have Chris Smalling and new-boy Eric Bailly in front of him. In the wing-back spots you have Luke Shaw and Matteo Darmian, who’ll provide plenty of threat going forward too.

Morgan Schneiderlin struggled at times under Louis van Gaal, but you feel he’ll be like a new signing if Mourinho utilises him correctly. The same goes for Ander Herrera and Bastian Schweinsteiger, who will both likely start.

The front three really does make you salivate. Anthony Martial on the left-hand side, with Henrikh Mkhitaryan on the right. Zlatan Ibrahimovic is the big-name striker we lacked last season. 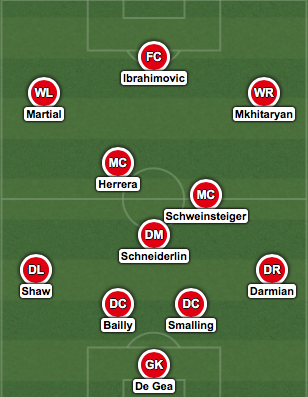 
About Jordan Street 12757 Articles
I'm a 25-year old aspiring writer and I created the blog as a platform to discuss all things Manchester United. Season Ticket holder block E332.
Website

Manchester United fans are currently having to suffer with the lack of Manchester United football due to the international break, and ahead of their return against West Brom a week-on Monday, we’ve been playing around […]

Manchester United’s season hinges on safe progression into the FA Cup semi-final later this evening, as well as Louis van Gaal’s position as manager being on the line. However the game against West Ham will […]

Manchester United head to Holland on Thursday, to kick off their Europa League campaign with a testing opening fixture against Feyenoord. The Dutch side will surely prove a threat, especially for a much-changed Mourinho side […]