Manchester United head to Holland on Thursday, to kick off their Europa League campaign with a testing opening fixture against Feyenoord. The Dutch side will surely prove a threat, especially for a much-changed Mourinho side as he wants to get his squad players involved.

We could see plenty of first starts of the season handed out, and that’ll likely start with Sergio Romero in goal. In front of him, he’ll have Chris Smalling and Eric Bailly protecting the goal. Marcos Rojo and Matteo Darmian will come in for Luke Shaw and Antonio Valencia respectively.

The midfield trio is an interesting one. Hopefully, we’ll see Morgan Schneiderlin at the base, allowing freedom for the two in front; Paul Pogba and Ander Herrera, who are both much more offensive-minded footballers.

Jose will change-up the front three entirely, with Anthony Martial and Juan Mata getting themselves a start. Both of whom consider each other unlucky to not have started in the derby. Marcus Rashford is a shoe-in to begin the game as the lone striker. 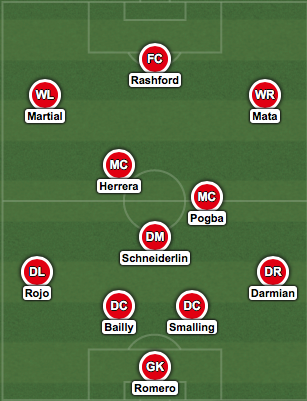 Manchester United host Swansea City this weekend, and it couldn’t get any worse for Louis van Gaal in a game he needs to win. In four attempts, the Iron Tulip has lost four games against […]

Manchester United play their biggest game of the season tomorrow evening, with Louis van Gaal’s side heading South to play West Ham. Champions league fate is now back in our own hands, so a win […]

Manchester United will be looking to make it eleven games unbeaten as they visit Stoke City to start off the New Year on Thursday, and despite a packed fixture list, Louis van Gaal will be […]