Manchester United take on Liverpool this weekend, in a fiercely contested fixture that historically produces goals galore. This game should be no different, with two sides who are struggling defensively at this current time.

The North-West teams are both battling for a place in the Champions League next term, and we’ve decided to have a look at the best possible XI for United, factoring in the current injury situation.

Wayne Rooney will once again lead the line, with Anthony Martial playing on the left and Jesse Lingard starting on the right-hand side.

The midfield three looks to have a nice balance about it, with Ander Herrera playing furthest forward. He’ll have protection from both Michael Carrick and Morgan Schneiderlin in behind.

The back five will remain unchanged. David de Gea starts in goal, with Chris Smalling and Daley Blind in the middle of the field. Darmian and Young will play on the flanks. 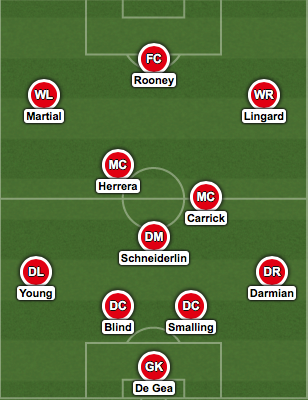 
About Jordan Street 12913 Articles
I'm a 25-year old aspiring writer and I created the blog as a platform to discuss all things Manchester United. Season Ticket holder block E332.
Website

Manchester United can secure their passage through to the Champions League knockout round with a win on Wednesday, but Louis van Gaal’s task hasn’t been made any easier with more than ten injuries currently haunting […]

Manchester United will be looking to get back to winning ways this midweek, with Jose Mourinho’s men losing three games on the bounce. The performances as a whole have not been anywhere near good enough […]

PICTURE: Potential 4-3-3 formation for Manchester United – No Rooney or RvP

The formation conundrum continues today, and this time we’re trying a rather controversial 4-3-3 formation: Without Wayne Rooney and Robin van Persie. Manchester United must utilise what system thats best for their current squad, and […]