Manchester United made the move for Memphis Depay for around £22.5million subject to a medical, and the 21-year old starlet will certainly be a key player for Louis van Gaal throughout the years to come.

Depay has scored 24 goals for PSV this season, but in some games he has been deployed up front. However at Manchester United I see him slotting at the left-winger slot in a 4-3-3.

As you can see from the graphic, the XI looks a lot stronger already. A front three of Depay, Di Maria and Rooney would terrorise most defences, and when you back that up with Herrera, Carrick and Fellaini the solidity is there too.

The back four suddenly looks a lot stronger with everyone fit as well, hopefully next season Luke Shaw can stay fit throughout, with Antonio Valencia almost certain to be replaced.

Obviously this line-up could change an awful lot by the start of next season, but this is what I’d go with if it were to start right now: 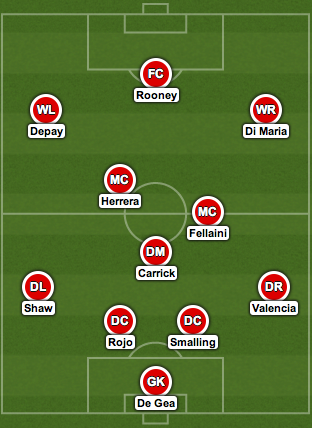 Don’t agree with the XI for next season? Let us know your thoughts in the comment box below.

Manchester United Football Club have been much-improved over the last few games, as Jose Mourinho’s men seemingly have managed to work out a way to get the confidence flowing. Next up, a game against our […]

Manchester United Football Club host Tottenham Hotspur at the weekend, with Jose Mourinho’s men coming into the game on the back of some poor form domestically. The Red Devils need a win pretty badly tomorrow, […]

Manchester United kicked off the tour with a pretty solid victory against the LA Galaxy, and now the games are starting to come thick and fast. Next up, another MLS Western Conference side, Real Salt […]