Manchester United Football Club take on Jose Mourinho’s former team in Chelsea this weekend, with the club looking to go to Stamford Bridge and cause an upset. I expect we’ll see a similar style of performance against the blues to the one we witnessed at Anfield on Monday night.

With that in mind, we’ve picked a team that we think Jose Mourinho will go with, and it’s very similar to that aforementioned game against Liverpool; with just one change made.

David de Gea will start in goal, with a duo of Chris Smalling and Eric Bailly sat in front of him. Antonio Valencia will hold down that right-back slot, with Daley Blind likely to get the nod ahead of Luke Shaw despite a good performance from the youngster against Fenerbahce.

The midfield three will also be the same. Marouane Fellaini did well against Liverpool, as did Ander Herrera. Paul Pogba will start, but he has to improve his form in the Premier League.

Marcus Rashford will play on the right, with Zlatan Ibrahimovic leading the line. Anthony Martial will be the one change Jose makes, with Ashley Young dropping to the bench.

Check out the full formation here: 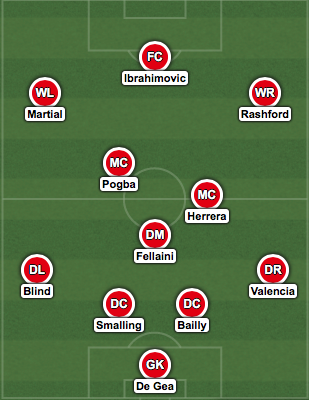 The upcoming Arsenal game is without doubt one of the biggest of our season thus far, as Louis van Gaal and Arsene Wenger lock horns for the first time in the Premier League. Both teams […]

Manchester United will have completely transformed by the time August comes around, with Jose Mourinho already putting his own stamp on the current squad. The self-proclaimed Special One still has plenty of work to do, […]