Manchester United got off to winning ways under Jose Mourinho, with the side securing an excellent 3-1 victory away from home. The wait to see our boys perform in the Premier League won’t be as long as usual, with United taking to the Old Trafford turf this Friday.

The visitors will be Southampton, who also won their first game of the season. We’ve decided to compile an early look at the line-up, and you have to say, it looks extremely strong.

The regular back five will start, with David de Gea playing in goal. Luke Shaw, Daley Blind, Eric Bailly and Antonio Valencia all looked superb against Bournemouth and deserve to continue.

In will come Michael Carrick as the back four protector and he’ll have Marouane Fellaini, and the most expensive player in the world in front of him; Paul Pogba. He’ll likely displace a poor Wayne Rooney in the side, and rightly so.

Anthony Martial will keep his place on the left, with Henrikh Mkhitaryan getting a first start to inject more pace into the side. Obviously Zlatan Ibrahimovic will start up front in his first competitive game at his new home. 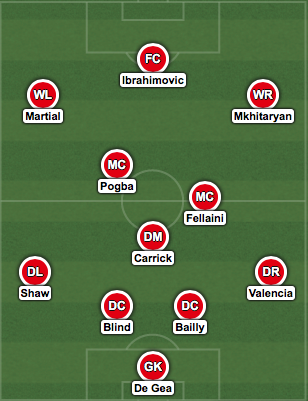 Manchester United have been given a glimmer of hope of finishing in an automatic spot into the Champions League group stage thanks to an Arsenal loss on Monday night. Now the two sides meet at […]

The upcoming Arsenal game is without doubt one of the biggest of our season thus far, as Louis van Gaal and Arsene Wenger lock horns for the first time in the Premier League. Both teams […]