Jose Mourinho sitting in the Manchester United dugout is all-but confirmed, with the Portuguese manager finally about to get his wish. He has craved the United job for years, and it all looks set to be confirmed before the week is out.

Ahead of his imminent arrival, Sky Sports News have drawn up a graphic showing off Mourinho’s extremely impressive league positions as manager – and its excellent viewing as a United fan.

The self-proclaimed Special One has delivered eight league titles in four different countries since 2002/2003, and has never finished outside the top three.

The most important thing is that he has plenty of Premier League experience, and thats where he has won three of his league titles. This is certainly an exciting appointment for Manchester United fans, and if he keeps up his track record, we could well be in for a real treat over the next few years.

Check out the graphic here: 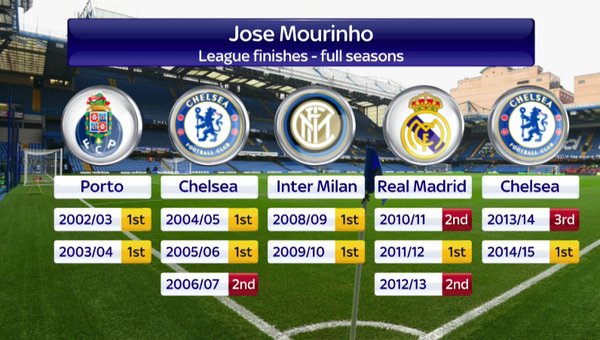 Manchester United Football Club are looking like a shadow of their former self under Jose Mourinho, with the self-proclaimed Special One seemingly having a real positive impact on the current playing squad. That has included […]

Manchester United could well be on their way to making a fourth summer signing, if reports from Turkish-Football are to be believed. They cite AS, who claim that Jose Mourinho has held several meetings with […]