Manchester United’s Ander Herrera found himself on the fringes of things in recent weeks – Largely due to a rib injury which meant that he couldn’t play at full capabilities for almost a month. Herrera got his chance to return to the side due to Angel di Maria’s first-half injury, and he certainly took it by putting in a Man of the Match Performance.

Data analysts Squawka have an excellent comparison matrix on their website, and here we look at Yaya Toure’s stats matched up against Ander Herrera’s. As you can see, all the important stats a midfielder should excel in are dominated by our Spaniard, including most key passes, tackles won, goals scored and assists.

When you look at these stats, it comes as no surprise that Ander’s influence in the Hull game this weekend was a crucial one, and maybe, just maybe, Angel di Maria’s injury is somewhat of a blessing in disguise. 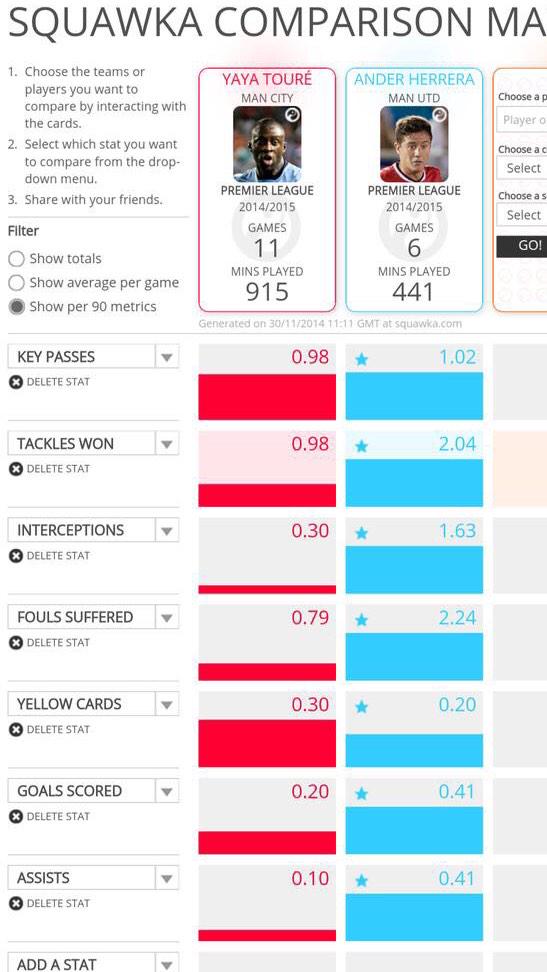 Who’s the better player on current form? Leave your thoughts in the comment box below.

Manchester United have learned some positive information before the return of Premier League football tomorrow. Both Ander Herrera and Marcos Rojo have been passed fit for the game against Everton, but they probably won’t be […]

Manchester United Football Club’s form has been brilliant recently, with Jose Mourinho’s men on an excellent unbeaten run in the Premier League. An ever present throughout that period has been Ander Herrera, with the fan […]

Manchester United still have a couple of key players who are out of contract this summer. Amongst those is Ander Herrera. Now, we’ve been given another update in regard’s to the 29-year-old’s future and unfortunately, […]