Since his £37.1m move from Chelsea back in January, Juan Mata has made a huge impact for Manchester United both on and off the pitch. The 25-year old has managed to bag five assists and five goals in his twelve United games so far, putting in some impressive performances.

The Spaniard’s weekly blog has been another thing to look forward to, and something more professional footballers should really consider doing. He gives us an insight into the mind of a pro sportsman and I personally find it really intriguing.

For April, Mata managed to score four times and also add one assist. His impact is often more than that though. We’ve lacked a real playmaker who can pick that penetrative pass from in the midfield, and Juan Mata certainly gives us that.

My worry for Mata is that he has been dropped by Giggs for two of the three games he has been in charge, and hopefully he’ll get an inclusion in the starting line-up by Louis van Gaal, although he probably won’t suit his preferred formation.

Do you think Louis van Gaal will use Mata in his starting XI? Leave your thoughts in the comment box below. 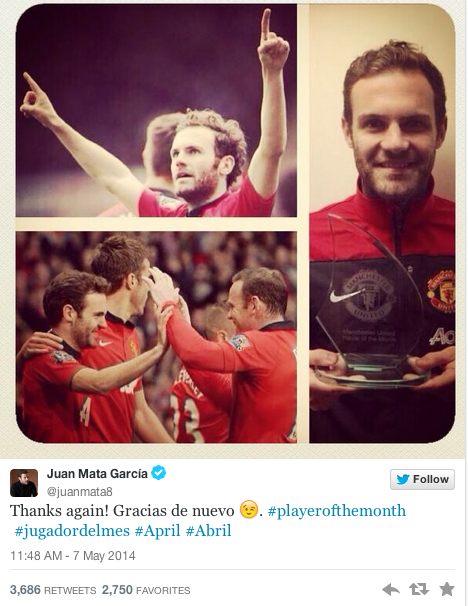 Manchester United’s results have taken a turn for the worst recently, but Juan Mata has jumped to the defence of his new manager by stating that the players are still learning from Louis van Gaal […]

Well, Manchester United booked their place in the Carabao Cup final four last night, though Colchester certainly put up a fight. Credit where it’s due, our opponents frustrated us for a large majority of that […]

Picture: Manchester United superstar in the away end as Red Devils beat Burnley 2-0

Manchester United Football Club got all three points at Turf Moor this afternoon, thanks to an excellent brace from Jose Mourinho. Before the game, all the attention was towards Juan Mata in the away end. […]