Manchester United have now won six games on the trot in the league, and are shooting up the table. After a spot in the Champions League was hanging in the balance a few weeks ago, it now looks an inevitability, and its all down to Louis van Gaal.

As you can see from the graphic below, United’s record against the fellow clubs in the hunt for the league and Champions League spots is exemplary.

United have played eight, won five, drawn one and lost just two games against those opponents, and sit four points clear of Manchester City on the top six head-to-head league. 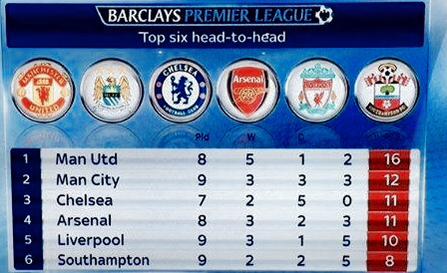 Can United challenge for the title next season? Leave your thoughts in the comment box below.

Manchester United have a fierce rivalry with Liverpool both on and off the pitch, however these amazing clubs who have great traditions are United in tragedy. United have suffered the Munich air disaster, where our […]

Manchester United overcame Liverpool with a convincing 2-1 victory at Anfield yesterday, and what better way to discuss the performance with fellow Reds in a live chat scenario? INPLAY, a social messaging football application allows […]

The Manchester Evening News have compiled a last of Manchester United players contract expiry dates, and as you’ll see below, no fewer than seven first-team players are out of contract in the summer. Adnan Januzaj, […]