Despite not picking up a win, Manchester United’s performance level has certainly risen in the games against Manchester City and Chelsea. Louis van Gaal will definitely know more about what players he thinks will feature in his regular starting line-ups from here on out, but we’ve decided to have a look at our best possible XI.

David de Gea is a shoe-in. Our Spaniard is one of the best, if not the best keepers in the Premier League and he shown that once again against Manchester City. Rafael is our only natural right-back, so he has to start, and Luke Shaw has been extremely impressive since forcing his way into the starting XI.

Phil Jones is without doubt our most talented centre-back, whereas Rojo’s passion and energy means he has to be involved despite not being the most technically gifted.

The midfield is where we are ironically looking our strongest. The additions of Ander Herrera and Daley Blind have made us much more competitive in the middle of the park, and when you combine that with Wayne Rooney’s energy at the #10 spot, good things are bound to happen.

Angel Di Maria will obviously always start when fit due to his electricity, and Adnan Januzaj is showing glimpses of exactly what he is capable of. In the striker spot i’ve gone for Radamel Falcao, as we all know just how good he can be when fit. He has to start proving that he can stay injury-free for a decent run of games sooner rather than later though… 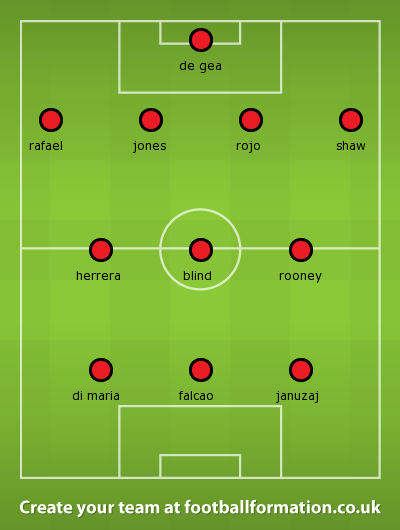 Manchester United take on Liverpool this Sunday, in a huge Premier League encounter. Despite the Old Trafford club’s dodgy form this term, there’s still no bigger fixture on the English football calendar. In the build-up […]

Manchester United Football Club have started the league in lethargic fashion. Jose Mourinho’s men are already eight points off the pace. We’re just six games in. The Red Devils get a welcome break as attentions […]