Manchester United confirmed that Patrice Evra had completed his move to Juventus earlier today, and shortly after that a heartfelt statement written by Patrice followed shortly after. In his eight year stay at Old Trafford, Evra won it all, including the sacred Champions League crown.

The deal for the 33-year old is thought to be worth £1.5million, which isn’t too bad for a player who’s best years are certainly behind him. Unfortunately though, it looks like the move doesn’t have any links with a move that could see Arturo Vidal move to Manchester United – as that deal looks increasingly dead in the water. 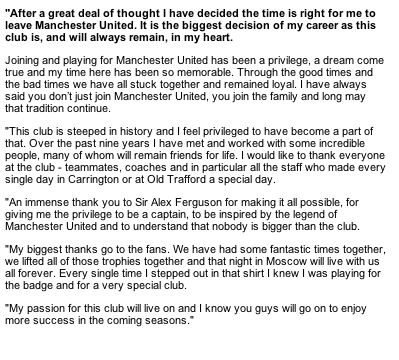 Manchester United have enjoyed a great month of September across a variety of competitions. Jose Mourinho’s men look like the real deal at this point in time, and a large part of that success is […]

Arguably one of the best left-backs the Premier League has been graced with is without doubt Patrice Evra, and the current Juventus left-back loved his time at Old Trafford, and the fans loved him for […]

We all love Patrice Evra, don’t we? The former Manchester United left-back had been without a club, but today, West Ham confirmed that they’d signed him on a free transfer. Now 36, Evra is obviously […]