Manchester United’s next Premier League game is a tricky trip to fellow top four hopefuls Arsenal, and with Arsene Wenger’s side showing some good form of late, this game is bound to be a tricky one. Our back line is looking depleted because of injuries at the moment, and that doesn’t look like easing up before this game.

I reckon Louis van Gaal will go for a central defensive partnership of Tyler Blackett and Paddy Mcnair. The two have shown great promise when played, and with the injuries persisting at the moment, why not give them their chance in the big game.

The midfield three pretty much picks itself, and the front three is another area up for discussion. Wayne Rooney will start, as will Radamel Falcao if fit. Juan Mata did well when he came on, so he simply must get the nod. 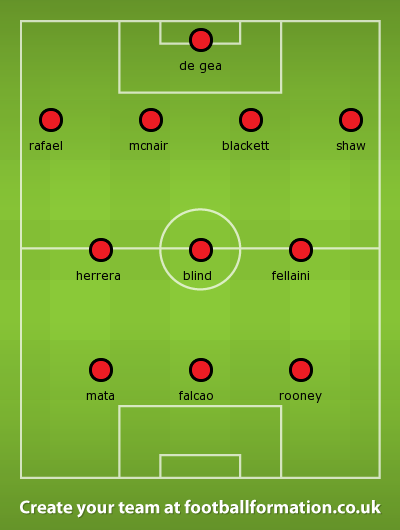 
About Jordan Street 13126 Articles
I'm a 25-year old aspiring writer and I created the blog as a platform to discuss all things Manchester United. Season Ticket holder block E332.
Website

Manchester United secured their first win in four games last night, and Louis van Gaal will be keen to back up a much-improved performance this weekend against West Brom in the Premier League. At the […]

Manchester United will obviously be low in morale following the horrendous Champions League exit in the week, but the players will have to dust themselves down quickly and get back in the swing of things […]