Manchester United will be looking to avenge the horrific 5-3 defeat away to Leicester early on in the season, as the two sides meet at Old Trafford this Saturday. Louis van Gaal will have a decision to make regarding the formations, and perhaps some even bigger decisions in terms of personnel.

Hopefully this will finally be the game in which we see Ander Herrera get a much-deserved start in the middle of the park. For some reason, the Iron Tulip has been reluctant to utilise the Spaniard who seems to be playing so much better than all the other midfielders.

Robin van Persie should return once again, and he’ll partner up with club captain Wayne Rooney, with Angel di Maria providing them plenty of service in behind.

Marcos Rojo and Phil Jones make up the central defensive partnership, with Daley Blind and Antonio Valencia providing the width from the wing-back slots. 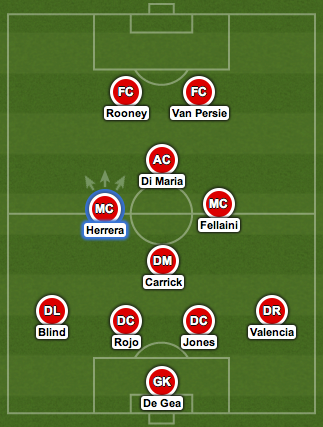 
About Jordan Street 13323 Articles
I'm a 25-year old aspiring writer and I created the blog as a platform to discuss all things Manchester United. Season Ticket holder block E332.
Website

Manchester United take on Manchester City for the first time of the season this coming Saturday, with Jose Mourinho and Josep Guardiola fuelling a rivalry which began out in Spain. Ahead of the game, we’ve […]

Manchester United Football Club turn their attentions back to the Premier League this weekend, with a win here essential to cling onto any hopes of finishing in the top four this season. As games come […]