Manchester United fans are currently having to suffer with the lack of Manchester United football due to the international break, and ahead of their return against West Brom a week-on Monday, we’ve been playing around with a few potential formations for Louis van Gaal’s new-look side.

This particular formation is a typical 4-3-3, with a few surprises in there. I’ve gone for Rafael and Shaw as wing-backs, with Phil Jones and Tyler Blackett the centre-back duo. Blackett has been our most consistent defender so far this year, whereas Jones has probably been our best centre-half.

The midfield three is one of solidity. Michael Carrick, Daley Blind and Ander Herrera all like a tackle, and I think they’d compliment each other very nicely.

The front three doesn’t include Juan Mata, Robin van Persie or Wayne Rooney, and instead we’ve opted for Angel Di Maria, Radamel Falcao and Adnan Januzaj. Purely for their pace, trickery and speed out wide, and Falcao’s ability in the air. 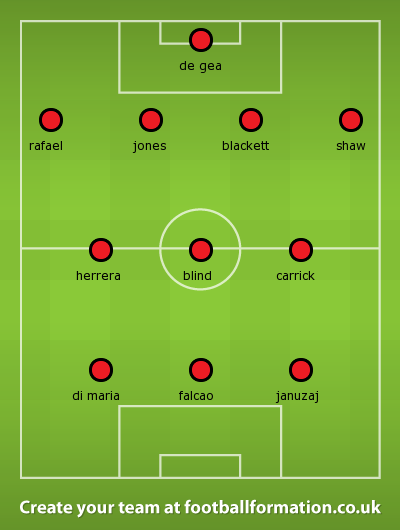 
About Jordan Street 12936 Articles
I'm a 25-year old aspiring writer and I created the blog as a platform to discuss all things Manchester United. Season Ticket holder block E332.
Website

Manchester United return to continental competition this coming Tuesday, with Louis van Gaal’s side hosting CSKA Moscow. The teams met just a fortnight ago and played out an entertaining 1-1 draw in a game that […]

Louis van Gaal and Ronald Koeman will lock horns once again this weekend, as Manchester United host Southampton in an eagerly anticipated battle between two sides in the current top four. A win in this one […]

Manchester United head to the Etihad on Sunday, to take on Manuel Pellegrini’s Manchester City in the first derby of the season. City have made a somewhat shaky start to the new campaign, but still […]