The second Manchester derby of the season is upon us, and Manchester United will be out for revenge after suffering a 1-0 defeat last time out. The tables have turned somewhat since then, as this weekend United leapfrogged their rivals in the table.

Louis van Gaal seems to have got things working at Old Trafford at the moment, with United coming into this one on the back of five consecutive wins – including against the likes of Spurs and Liverpool.

The team shouldn’t change much, especially the front three of Wayne Rooney, Ashley Young and Juan Mata, who have been in imperious form.

Ander Herrera, Michael Carrick and Marouane Fellaini are a midfield trip who have improved greatly of late, with the perfect blend of physicality, intelligence and passing. 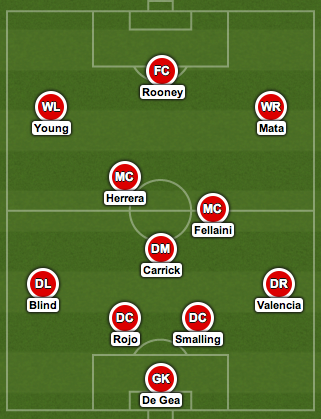 
About Jordan Street 13434 Articles
I'm a 25-year old aspiring writer and I created the blog as a platform to discuss all things Manchester United. Season Ticket holder block E332.
Website

Manchester United can capitalise on Chelsea’s 2-1 loss to Newcastle yesterday, by taking all three points away at Southampton this Monday night. There is probably no better time to play Koeman’s side, as their injury-hit […]

Manchester United’s attentions turn to FA Cup action tomorrow, with Louis van Gaal’s side heading to Shrewsbury Town. League One opposition have been tough for United in the past, as we lost to MK Dons, […]