Manchester United simply have to keep on winning, particularly after close rivals all won important games in the league yesterday. Louis van Gaal will be keen to string a few wins together as the crunch games start coming thick and fast, and that starts this Wednesday night.

United head to St James’ Park with a few injury concerns in key positions. David de Gea picked up a knock in training according to the usually reliable Physio Room, whereas Victor Valdes is currently sidelined with a minor problem. That could provide Anders Lindegaard with a huge chance.

The rest of the team pretty much picks itself, with the only other spot up for debate the #10 slot, with Juan Mata hopefully coming in for the largely ineffective Angel di Maria. 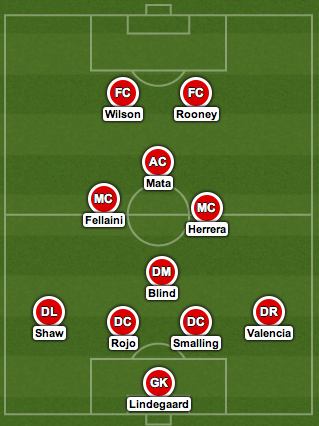 
About Jordan Street 13567 Articles
I'm a 25-year old aspiring writer and I created the blog as a platform to discuss all things Manchester United. Season Ticket holder block E332.
Website

Systems, Formations and Philosophies: The future for Manchester United

Three games down, thirty-five to go, and just two points on the board so far. Not what we anticipated at all. However there’s a long way to go and following our record breaking transfer window, […]

Manchester United simply have to get back to winning ways on Wednesday, as the struggling Burnley FC visit Old Trafford. In their last meeting, Burnley held United to a 0-0 draw as Angel di Maria […]

Manchester United’s attentions turn towards the oldest trophy in English football this weekend; the FA Cup. It’s a tournament that Jose Mourinho’s team were dumped out of in acrimonious fashion last term, and the Red […]