Manchester United comfortably progressed through to the fifth round of the FA Cup on Tuesday night, and now attentions will be refocused on Premier League football, and obtaining a spot in the top four. The task will be a tricky one, and this weekend’s game will be extremely tough.

Louis van Gaal takes his men to West Ham, who have been in superb form of late themselves. I can see the Dutchman reverting back to the five-at-the-back for this one, which offers us more defensive solidity and enabling us to counter on the break.

Phil Jones should return to the line-up, with Luke Shaw overcoming a minor injury to start in the left-wingback role. Antonio Valencia will come back into the team as the right-wingback, with Daley Blind in front of them protecting the back four.

Angel di Maria and Wayne Rooney make up the midfield duo and offer that much-needed pace, with Radamel Falcao and Robin van Persie in front of them. 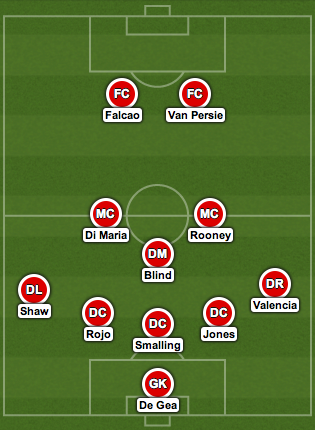 Finally, we’re just a few days away from the return of Manchester United Football Club. We’ve had to wait close to a fortnight to see our Red Devils take to the field again, purely due […]

Manchester United are now just one week away from the curtain raiser of the Community Shield, with Jose Mourinho looking to kick things off with an all-important victory. Before that game, though, is Wayne Rooney’s […]