Jose Mourinho’s side are looking like a typical club managed by the Portuguese coach. Strong, physical, and most importantly, clinical. We’re no longer a side based on measured possession, but now attacking at every possible opportunity which is exciting to watch.

Manchester United grabbed an excellent 2-0 victory at home to Southampton on Friday evening, with Zlatan Ibrahimovic scoring both of the goals. There was also a stunning debut for Paul Pogba, fresh off of his £89million world record transfer back to Old Trafford.

The pair were both named in WhoScored’s second Premier League Team of the Week this season, and more than deserved their place in a side that really impressed.

Zlatan Ibrahimovic came in with an excellent 8.30 rating thanks to that super header and clinical penalty. Paul Pogba has one of the highest ratings in the side, with an 8.85, thanks to completing the most take-ons of any player in the league all weekend (8). The only player to score higher in the team was Curtis Davies of Hull City.

Check out WhoScored.com’s Team of the Week here: 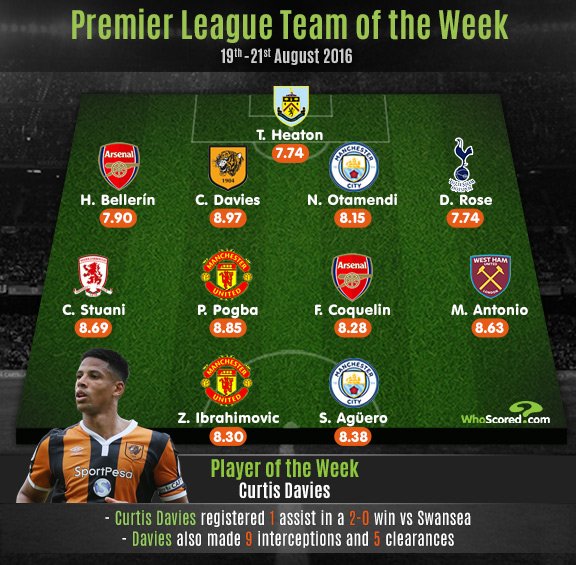 About Jordan Street 13732 Articles
I'm a 25-year old aspiring writer and I created the blog as a platform to discuss all things Manchester United. Season Ticket holder block E332.
Website

Manchester United grabbed another three points yesterday evening, and what a richly deserved win it was. Jose Mourinho’s team are beginning to look like an outfit capable of winning trophies, and right at the heart […]

Over the summer when Manchester United splashed big money to bring in Paul Pogba, the Red Devils’ fans certainly got excited. The 23-year-old was regarded as one of the best central midfielders on the planet, […]

Manchester United are finally about to seal a deal for Zlatan Ibrahimovic, after almost a month of talks and gossip. Now, according to the Daily Mail as well as others, a deal is set to […]