Manchester United simply could not have made a better start to the season. Jose Mourinho’s Red Devils have two 4-0 wins on the board already, and remarkably, they’ve already amassed 15% of their total goals from the whole of last season.

Next up is another home fixture. This time, against Leicester City who themselves have made a steady start to the season under Craig Shakespeare. Ahead of the match, we’ve tried to work out our starting XI for the match, and it looks mightily strong. 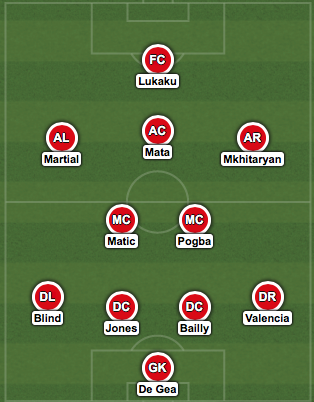 In goal, of course, David de Gea is going to continue. There isn’t much really else to say here, he’s the best keeper in the league and when he’s fit he’ll start.

The back four should remain exactly the same. Phil Jones is playing like a man possessed at the start of this season, and Eric Bailly is just a tank. Either side of those guys you’ll have the intelligence and versatility of Daley Blind, coupled with the pace and aggression of Antonio Valencia.

Nemanja Matic will anchor the midfield, and he’ll sit just in front of the back four. That allows Paul Pogba to do what he does best – get forward and wreak havoc in between the lines.

Then, the front four is where we’re at our strongest. Henrikh Mkhitaryan has been nothing short of sensational in the two games so far, picking up four assists. Juan Mata is the man that makes the rest of the front line tick, and Anthony Martial will finally get the start his play has deserved. Romelu Lukaku has scored four in three games, and he simply has to continue.

Manchester United’s barron spell has been hard to watch over the past few weeks, with Louis van Gaal doing too much tinkering that outwitted himself from time-to-time, leaving Robin van Persie, Wayne Rooney and Radamel […]

Manchester United will have been working extra-hard this week, after a shock result last time out at home to Southampton. Louis van Gaal got his tactics all wrong that day, and the fans will certainly […]

Manchester United are rapidly closing in on their second summer signing, and it literally came from out of nowhere. Reports suggested that a move for Romelu Lukaku was in the offing, with a £75million fee […]