Manchester United will be hurting after dropping points at home in the Premier League last time out, and now attentions turn back to European football. Next up, a tricky trip to Russia to take on FC Rostov in the first leg of our round of sixteen game.

Jose Mourinho’s men will be looking to avenge that poor result at the weekend, and I fully expect the boss to pick a strong XI for this one.

David de Gea will start in goal, and Eric Bailly should return to the line-up after missing out at the weekend. He’ll partner Marcos Rojo who scored our only goal against AFC Bournemouth. Luke Shaw acquitted himself nicely last time out, but he’ll need some rest so Daley Blind will come back in. Antonio Valencia looked to be carrying an injury so we could see Fosu-Mensah start.

Ander Herrera was another one of those guys who was rested so he’ll come back into the mix here alongside Paul Pogba – a frightening duo. Juan Mata will sit just in front of them in the #10 spot.

Marcus Rashford should get a rare outing, the same can be said for Jesse Lingard. Zlatan Ibrahimovic could well be hit with a three-game domestic ban so the logical option is to give him a start here. 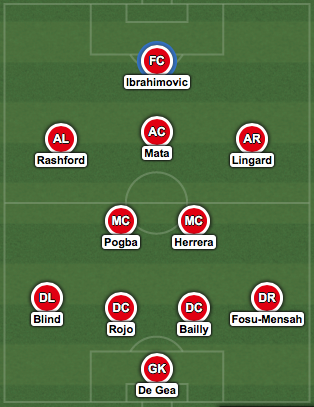 Ralf Rangnick’s boys head down south to play yet another Premier League game. Our predicted MUFC XI for that fixture vs Brentford is now in… EDIT: This game has since been postponed and will be […]

The second Manchester derby of the season is upon us, and Manchester United will be out for revenge after suffering a 1-0 defeat last time out. The tables have turned somewhat since then, as this […]