Manchester United can seal qualification through to the knockout stages of the UEFA Champions League with a victory tonight. Jose Mourinho’s men host SL Benfica at the Theatre of Dreams, with the Red Devils desperate to wrap up safe progression.

Not only will it allow United to rest some players over our last two games, it gives Mourinho one less thing to focus on, meaning all of his attention will turn to Premier League football from now until February.

Ahead of that, we’ve drawn up the starting XI we expect the self-proclaimed Special One to name this evening. 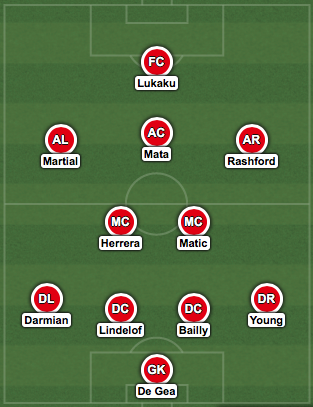 In goal, David de Gea will continue. Eric Bailly is now back, and I fully expect him to play, alongside former SL Benfica star Victor Lindelof. Ashley Young will shift over to the right-back slot, with Matteo Darmian making up the back four.

We’re still no closer to our midfielders returning to fitness, so it certainly looks as though both Ander Herrera and Nemanja Matic will continue playing. Juan Mata will start just in front of them in a more advanced role.

Anthony Martial and Marcus Rashford played together against Swansea City. This time around, I think we’ll see them start alongside one another. Romelu Lukaku will lead the line.

About Jordan Street 14682 Articles
I'm a 25-year old aspiring writer and I created the blog as a platform to discuss all things Manchester United. Season Ticket holder block E332.
Website

Manchester United fought hard and eventually earned a point away at West Ham courtesy of an injury-time Daley Blind leveller. Louis van Gaal brings his side back to Old Trafford, with a game against Burnley […]

Manchester United Football Club has looked excellent in European competition this season. Jose Mourinho really has the Reds playing the way that United should, and long may that continue. Next up, an away trip to […]

Manchester United Football Club are well in preparation for the Manchester derby this weekend, with Pep Guardiola bringing his City side to the Theatre of Dreams for the first time. The game is sure to […]