Manchester United dropped five points off the Premier League pace over the last couple of fixtures. Jose Mourinho has to get his side ready to bounce back, and it all starts against Tottenham Hotspur.

We all know this fixture is going to be tough. Mauricio Pochettino is building a superb team in North London, but United are desperate to secure three points here.

With that in mind, check out our predicted starting line-up for the early Saturday kick-off. 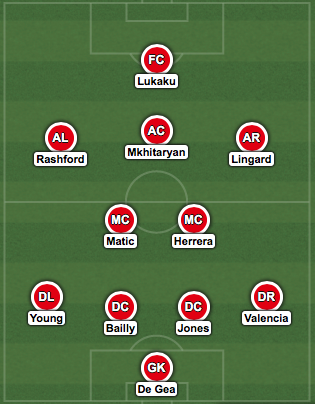 David de Gea will start in goal, and here is the good news. Personally, I expect both Eric Bailly and Phil Jones to be fit and ready to play. Antonio Valencia will start, as will Ashley Young.

The midfield picks itself at this point. We’re struggling for fitness for several key starters, so it’s down to both Nemanja Matic and Ander Herrera to keep plugging away. Hopefully, they can put in a commanding display.

Jesse Lingard played a blinder away at Swansea City, so he more than deserves to retain his place in the side. Henrikh Mkhitaryan sat out in midweek, so I’d expect to see the Armenian starting. Marcus Rashford has been in good form, he’ll get the nod. Romelu Lukaku leads the line.

After probably the biggest summer in the clubs history, Manchester United now have one of the most potent attacks in European football. The arrivals of Radamel Falcao and Angel Di Maria have sent a message […]

It has been a decade since Manchester United have had a real good FA Cup run, and Louis van Gaal has been handed the perfect opportunity in his debut season to win his first piece […]

Manchester United’s biggest game of the season is just on the horizon. The Red Devils’ game against Celta Vigo is for a spot in the Europa League final, and with our squad decimated by injuries, […]