Manchester United Football Club returned to winning ways over the weekend, with a much-needed victory at home to Brighton. Next up, a tricky trip to high-flying Watford on Tuesday.

This game will not be easy. Marco Silva sets his teams up brilliantly, and no doubt Jose Mourinho will be planning meticulously for this one.

With that said, this is the starting line-up that we think the self-proclaimed Special One will opt for: 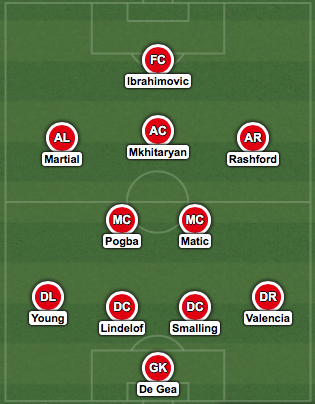 In goal, David de Gea will continue. He’ll be in high spirits after keeping a clean sheet last time out. The same can be said for both Victor Lindelof and Chris Smalling, who had a largely positive game at the weekend. Ashley Young and Antonio Valencia make up the back line.

The same midfield two will take to the field. Paul Pogba will feel all the better with 90 minutes under his belt, with Nemanja Matic once again continuing as the midfield enforcer.

Henrikh Mkhitaryan returns to the starting XI in the #10 role following a stint out of the team. Marcus Rashford and Anthony Martial will play, with Zlatan Ibrahimovic making his first start in over six months.

Proper football is back on the agenda for Manchester United fans, and it starts this weekend with the Premier League curtain raiser that is the Community Shield. Jose Mourinho’s side take on champions Leicester, in […]

Manchester United Football Club are back! Jose Mourinho’s men have been waiting two weeks to get back to winning ways following the embarrassing display that they put on in the derby last time out. Next […]