Manchester United Football Club are all set to play their first game in well over a month. Jose Mourinho’s men take on the LA Galaxy at the StubHub Center tomorrow evening, and it’ll be a great chance for us to get a look at how the team is shaping up.

With that in mind, we’ve decided to try and work out the great mind of Jose Mourinho, and predict a starting line-up as best we can. We’ve given it a good go, so it out here.

Have a look at the full starting XI here: 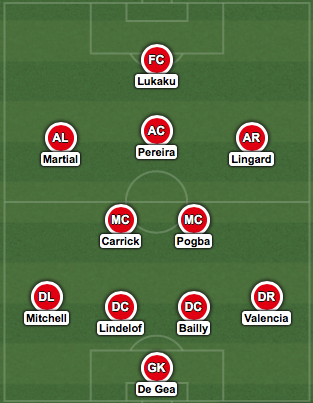 Jose Mourinho has already confirmed that Sergio Romero will sit this one out, with David de Gea and Joel Pereira set to play a half each.

Then, onto the back four, I’ve gone for the centre-back pairing of new-boy Victor Lindelof and Eric Bailly. Either side of those guys, it’ll likely be Antonio Valencia and Demetri Mitchell, as I doubt Luke Shaw will be thrown right into the deep end as he’s still probably feeling some pain regarding his injury.

Newly-appointed Manchester United captain Michael Carrick simply has to start his first game in charge of the lads, hopefully, we’ll get to see Paul Pogba given the nod alongside him.

The front four is full of talent, excitement and creativity; and it’s fronted by a certain Romelu Lukaku who’ll be tasked with getting our goals this season. In behind him is Andreas Pereira, a gifted individual who spent last season on loan at Granada. Either side of the little Brazilian is Juan Mata and Jesse Lingard, who both bring an awful lot to the table.

About Jordan Street 15517 Articles
I'm a 25-year old aspiring writer and I created the blog as a platform to discuss all things Manchester United. Season Ticket holder block E332.
Website

Manchester United’s current strategy and formation is a bit of a conundrum at present, and Louis van Gaal has a huge selection of attacking talent at his disposal. The Old Trafford crowd are hoping for […]

Manchester United Football Club dropped a couple of points at home to West Bromwich Albion on Saturday, but there is no time to dwell on it as Everton visit Old Trafford on Tuesday. This match […]

Unfortunately, the international break is upon us – meaning we won’t see United for two weeks. Our huge stars will be representing their countries all over the world, whereas Louis van Gaal will be back at […]