After a dire performance in the Champions League, Manchester United’s attentions turn to a top of the table clash away at Leicester City – the surprise package in the Premier League this term. Louis van Gaal will certainly be keen to make amends for the 5-3 humiliation last season.

Manchester United have plenty of injuries all over the first-team squad, but a win here would see us sit top of the table. With that firmly in mind, Louis van Gaal will be keen to secure all three points.

Anthony Martial deserves a run up front, and in behind him is the club captain Wayne Rooney. Juan Mata returns to the line-up, with Memphis Depay continuing out wide left.

The back line and the holding midfielder role were once again solid against PSV, so I don’t see any real reason to change that area of the park. 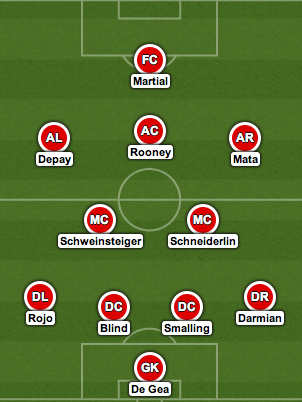 The Manchester derby is upon us, and Louis van Gaal will be hoping to avenge the 1-0 loss against our local rivals from earlier in the season. In quite ironic fashion United currently sit a […]

Manchester United have been on a great run since the turn of the year, with Louis van Gaal slowly but surely winning some of the Old Trafford faithful back. That can continue this weekend if […]