Manchester United Football Club have made an excellent start to the season, with Jose Mourinho certainly getting the right tune out of his current crop of players. With three wins from three, it looks as though our new boss has already found a winning formula.

Next up is a tricky trip to high-flying Hull City who have started the season brilliantly. We’ve decided to take a look at the potential starting line-up for that game, and wow it looks strong.

David de Gea will get the nod in goal, and although Chris Smalling is back in training, you struggle to see him displacing either Eric Bailly or Daley Blind. Both Antonio Valencia and Luke Shaw have to continue as the full-backs.

Paul Pogba made an excellent debut against Southampton and will obviously start again, as will Marouane Fellaini who was superb alongside his new midfield partner.

The front four looks exciting, and after a nice twenty-minute cameo from off of the bench, we could well see a first start for Armenian Henrikh Mkhitaryan. Anthony Martial did well on the left-hand side, with Wayne Rooney occupying the #10 role. Zlatan Ibrahimovic will obviously continue fresh off an excellent brace. 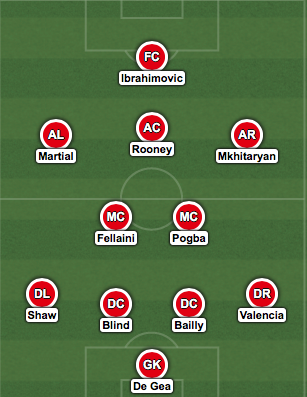 Manchester United take on manager-less Middlesbrough tomorrow lunchtime, with Jose Mourinho’s men looking to capitalise on Arsenal dropping more Premier League points. The game itself won’t be easy, particularly on the back of a gruelling […]

Manchester United progressed safely through to the FA Cup fourth round thanks to a comfortable victory over Derby County. Their prize? A trip to Yeovil Town; the lowest ranked side left in the draw. Jose […]

Manchester United have their second league home game in a row on Sunday, as they host Roberto Martinez’s Everton, who are flying under their Spanish manager. United’s injury-hit squad is slowly coming together bit by […]