The first Manchester derby is already upon us, with Jose Mourinho’s men taking on Pep Guardiola’s City side, who look equally as threatening as ourselves. The game gives both sides a chance to really throw a marker down and send out a real message to the rest of the Premier League.

Ahead of the game, Jose Mourinho could have a few concerns in terms of players being fit. Luke Shaw has been withdrawn from the England squad due to a minor problem, and Henrikh Mkhitaryan has been ruled out for a week with an injury.

With that in mind, we’ve selected a starting line-up that’ll probably take to the field against City.

In goal, we have David de Gea, and he’ll have the usual back two of Daley Blind and Eric Bailly in front of him. On the right-hand side Antonio Valencia will likely get the nod, and although Luke Shaw was sent home from England duty, he should be fit.

The midfield two is interesting. Marouane Fellaini picked up a knock after the Hull City game and he is a doubt, so I reckon we’ll go with Ander Herrera in the engine room, alongside Paul Pogba.

The front four is where our quality really shines through. Anthony Martial will start on the left-hand side, with Wayne Rooney through the middle. I think Mourinho will go for pace on the counter, so we could see Jesse Lingard get a start on the right, and obviously Zlatan Ibrahimovic will lead the line. 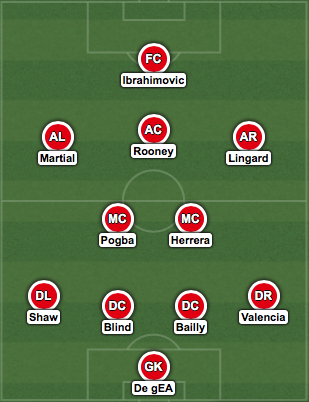 Manchester United’s winning run was ended with a 1-1 draw at Villa Park on Saturday, and Louis van Gaal will be looking to get back to winning ways with Newcastle visiting on Boxing Day. Manchester […]

Manchester United face their sternest challenge of the season so far, as Jose Mourinho brings his unbeaten Chelsea side to the Theatre of Dreams as they look to maintain that record. Louis van Gaal will […]

Manchester United will have been working extra-hard this week, after a shock result last time out at home to Southampton. Louis van Gaal got his tactics all wrong that day, and the fans will certainly […]