Manchester United followed up three defeats on the trot with three wins on the bounce, and now Jose Mourinho will be looking for his side to push on from here and keep going. Next up, Stoke City at home, and they’ll provide a physical challenge as well as some potentially dangerous opponents on the counter.

Ahead of the eagerly anticipated fixture, we’ve taken a look at a potential starting line-up for the match, and you have to say it looks ridiculously strong.

In goal, we have David de Gea, and the centre-back pairing of Chris Smalling and Eric Bailly will start in front of him. Daley Blind had a cracking game at left-back against Leicester so he’ll start there again. Antonio Valencia has to start at right-back.

Ander Herrera grabbed a well-earned rest in the Europa League against Zorya and he’ll come back into the line-up alongside Paul Pogba. The front four is where things get most exciting. Juan Mata will play in behind the striker, with Marcus Rashford and Henrikh Mkhitaryan on either flank. Zlatan Ibrahimovic will continue to lead the line. 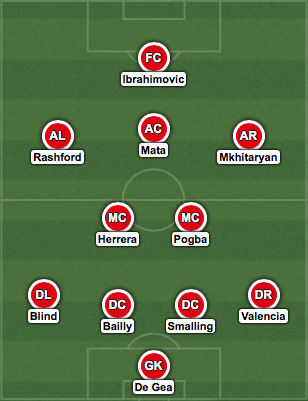 About Jordan Street 14835 Articles
I'm a 25-year old aspiring writer and I created the blog as a platform to discuss all things Manchester United. Season Ticket holder block E332.
Website

At the weekend, Manchester United’s defensive struggles were evident. The only recognisable centre-back within the matchday squad was Phil Jones, and questions were raised about whether any players would be back in time for the […]

Manchester United suffered a shock 2-1 defeat at the hands of West Brom yesterday. The worrying thing from a Red point of view is the fact that when we went 2-1 down, the team didn’t […]

Ole Gunnar Solskjaer’s Man United go head-to-head vs Burnley this weekend, with our predicted XI now in… Manchester United Football Club look destined to finish in that second-place position in the Premier League. Credit to […]