Manchester United’s attentions have turned back to the Europa League for this midweek, as the Red Devils are gearing up for a potentially tricky UEFA Europa League quarter-final. Anderlecht are the opponents, and they’ll be really looking to cause an upset.

Ahead of that match, it’s time to try and work out what starting XI we could well see take to the field, and although it’s tough this is what we’ve come up with.

In goal, Sergio Romero will continue as he’s been pretty excellent as our cup goalkeeper this season. In front of him, Eric Bailly and Marcos Rojo have also been a pleasant pairing to watch and given the current injury situation, they have to continue. Antonio Valencia will come into the side as the right-back after missing a couple of games, and I hope that Mourinho persists with Shaw in that left-back role.

Onto the midfield, then, and despite plenty of doubters, Marouane Fellaini has to start based on recent displays. Ander Herrera has turned into a reliable guy for us in that area of the field and the Spaniard also deserves the start. Paul Pogba makes up the trio.

The front three will be spearheaded by Zlatan Ibrahimovic. The influential Swede has been sensational this year and he has to start. Anthony Martial hasn’t started in a few games and this may be his chance to impress. Henrikh Mkhitaryan also gets the nod.

Have a look at the full starting eleven here: 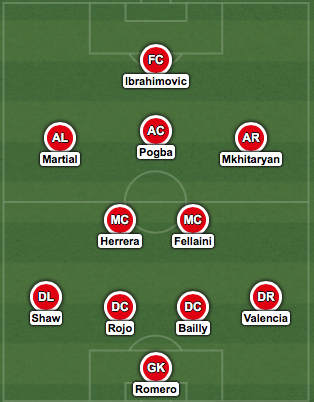 MUFC are straight back at it this weekend, this time vs Tottenham Hotspur. A win here is vital, with our predicted line-up now in… Ole Gunnar Solskjaer’s job is hanging on by a thread. Though […]

Manchester United have one more game before the international break, and despite some poor results of late, Louis van Gaal’s side sit jus four points away from a top four spot. Encouraging performances against Chelsea […]