Manchester United’s focus turns back in the direction of the Premier League this weekend, with the Red Devils heading to The Emirates Stadium, to take on Arsenal. The game itself should be an intriguing clash, particularly when you factor in that Jose Mourinho has already said he will be resting players.

Ahead of that game, we’ve tried to work out just exactly who the self-proclaimed Special One will turn to; and our line-up still looks pretty strong.

Let’s start at the back, then, and in goal, David de Gea will be the man who gets the nod. The Spaniard got the chance to rest as Sergio Romero has been our Europa League goalkeeper. So ‘Big Dave’ will be raring to go.

The midfield was boosted massively by the return of Paul Pogba against Celta, and it makes sense handing him another start to build up that match fitness. I think he will be partnered by Michael Carrick, with Ander Herrera given the chance to rest.

Onto the front four, that should be spearheaded by Anthony Martial. We could also see Juan Mata return which would be lovely. There is also starts for both Jesse Lingard and Henrikh Mkhitaryan, who have been in and out of things recently.

Have a look at the full starting line-up here: 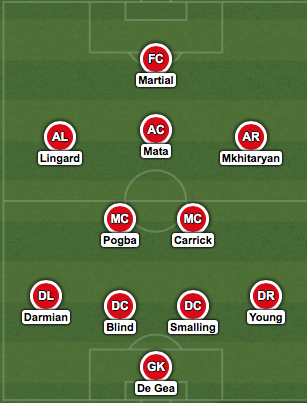 The only realistic chance Manchester United have at silverware this season now lies with the FA Cup, and Louis van Gaal continues his quest in that competition this Friday night. However it won’t be easy […]

Manchester United return to action this weekend, with Tim Sherwood bringing his Aston Villa side to Old Trafford, with both teams showing some good form of late. Louis van Gaal could find his side eight […]

Manchester United’s tour in the far East was flawless. Four wins from four stand the Red Devils in good stead before their final two friendly games. Next up is a trip to Ole Gunnar Solskjaer’s […]