This is a game in which the Red Devils certainly need to bring at least a point back to Manchester, to prevent our rivals getting another march on us in the title race.

With that in mind, we’ve tried to work out what starting line-up Mourinho will name. Trust us, it hasn’t been easy. 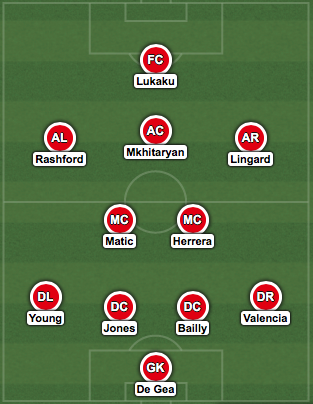 Although there are a couple of injury boosts with both Marouane Fellaini and Marcos Rojo travelling to London, I highly doubt that either of the pair will play.

David de Gea will start in goal, with both Phil Jones and Eric Bailly in front of him. Ashley Young will start as the left-back, with Antonio Valencia playing on the opposite side.

Nemanja Matic returns to the place where he won two Premier League titles, with Ander Herrera starting alongside the Serbia international. Henrikh Mkhitaryan will play just in front of these two, but expect him to track back.

Romelu Lukaku has struggled over the last few games, with this match presenting a real opportunity to send out a message. Jesse Lingard’s energy and movement will be a huge asset down the right, with Marcus Rashford making up the XI.

About Jordan Street 15676 Articles
I'm a 25-year old aspiring writer and I created the blog as a platform to discuss all things Manchester United. Season Ticket holder block E332.
Website

Before I begin, I’d just like to say that Patrice Evra was absolutely quality in the Sky Sports Monday Night Football studio for Sheffield United’s 1-0 victory over Arsenal. The former Manchester United left-back has […]

Manchester United’s Europa League campaign continues tomorrow, with Louis van Gaal hoping for progression into the round of sixteen. There is certainly added incentive in the competition this year, with a spot in the Champions […]

4-3-3: Likely Manchester United XI to take on City in the derby – Herrera starts

Well, the time is here folks. I can certainly think of Manchester derbies that I’ve been more excited for, that’s a definite… However, if ever Jose Mourinho’s men needed motivation, they’ve got it. The Red […]