Manchester United are now just one week away from the curtain raiser of the Community Shield, with Jose Mourinho looking to kick things off with an all-important victory. Before that game, though, is Wayne Rooney’s testimonial against his boyhood club Everton.

Our number ten will obviously want to put on a show for the paying fans, and this will be the final workout before the serious stuff starts. The match will also be Mourinho’s Old Trafford bow, and he’s sure to get a stunning reception.

The starting line-up for this match will be an extremely strong one, and as close to a probable line-up for the upcoming Premier League games. The front four in particular looks rather tasty.

Zlatan Ibrahimovic will lead the line, with Rooney in-behind. He’ll have Henrikh Mkhitaryan and Anthony Martial either side of our captain.

There is also a spot in the side for Eric Bailly who has looked brilliant since his arrival. Although Paul Pogba hasn’t signed yet, it looks like he’ll have to displace one of Michael Carrick or Morgan Schneiderlin in the line-up when he puts pen to paper.

Check out the full line-up here: 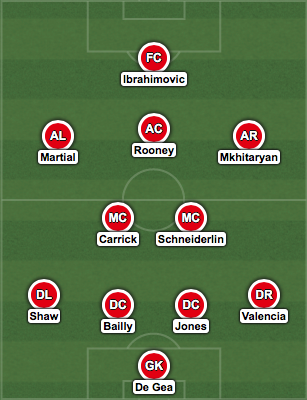 Manchester United return to our TV screens this Saturday, as Louis van Gaal prepares his side for a tough task away at Watford. The newly promoted side will certainly provide a stern test for the […]

Manchester United have been on an absolute tear recently, with Ole Gunnar Solskjaer’s team winning six from six and looking mightily impressive in the process. Next up for the Red Devils is an extremely winnable […]

Manchester United football returns in just a few days, as the Theatre of Dreams plays host to one of the biggest games of the season; Manchester United vs Liverpool. Louis van Gaal had a good […]