Manchester United Football Club dropped a couple of points at home to West Bromwich Albion on Saturday, but there is no time to dwell on it as Everton visit Old Trafford on Tuesday. This match is another key fixture in our race to finish in the top four.

Ahead of the match, we’ve decided to try and work out just exactly what Jose Mourinho will do with his starting eleven. It hasn’t been easy, but this is what we’ve come up with.

David de Gea will obviously continue in goal with the same back two of Eric Bailly and Marcos Rojo in front of him. Antonio Valencia has been truly brilliant recently and he’ll continue, with Ashley Young also filling in at left-back.

We’ll be getting Ander Herrera back from his suspension so he’ll obviously come straight into the team to provide some mobility. Marouane Fellaini will also get the nod after a solid performance.

The front four really struggled against WBA, but the best player out of the guys who started in that area was Jesse Lingard, and he’ll play once again, as will Henrikh Mkhitaryan. I can see Wayne Rooney coming back into the mix just to freshen things up, with Zlatan Ibrahimovic leading the line.

Check out the predicted line-up here: 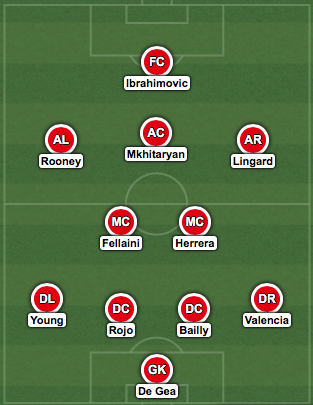 The Old Trafford faithful will be flocking to the game for the penultimate home match this season, as West Brom visit the Theatre of Dreams, captained by a Manchester United great in the form of […]

Manchester United have been on an excellent run since the turn of the year, with Louis van Gaal’s side seemingly finding the winning mentality under the Dutchman. That has largely been down to Wayne Rooney, […]

Manchester United’s biggest game of the season is rapidly approaching – the showpiece FA Cup final against Crystal Palace. The game could well be Louis van Gaal’s last as boss at United, and he’ll be […]