Proper football is back on the agenda for Manchester United fans, and it starts this weekend with the Premier League curtain raiser that is the Community Shield. Jose Mourinho’s side take on champions Leicester, in what is an eagerly anticipated game for all involved.

We’ve taken a look at the probable line-up for the game, and Jose will be looking to go as full strength as possible in this one, and we’ll get a real indicator as to what players he trusts at this early stage.

Zlatan Ibrahimovic will start up front, and he’ll have club captain Wayne Rooney in-behind him. They’ll also be pace to burn on the wings, with Henrikh Mkhitaryan and Anthony Martial getting starts.

The midfield is a tough one. I fancy Jose to go with Morgan Schneiderlin and Ander Herrera this weekend, but don’t be surprised to see Michael Carrick displace one of the pair.

De Gea will start in goal, as will the back four that has played plenty of minutes in pre-season; Luke Shaw, Daley Blind, Eric Bailly and Antonio Valencia. 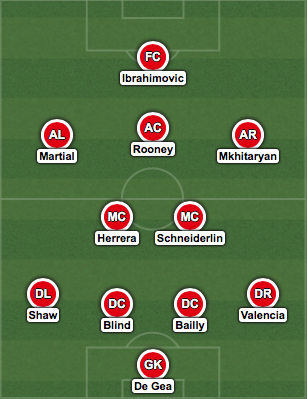 About Jordan Street 15372 Articles
I'm a 25-year old aspiring writer and I created the blog as a platform to discuss all things Manchester United. Season Ticket holder block E332.
Website

Manchester United continue their quest to cement a spot in the top four at home to West Brom this weekend, with Louis van Gaal set to receive a few boosts in terms of key players […]

After another successful Premier League weekend is in the books for Manchester United, their attentions turn back to continental football. Jose Mourinho’s men head to Russia in a strenuous away fixture, but, the Red Devils […]

Manchester United Football Club turns their attentions to the semi-final of the EFL Trophy tomorrow evening, when Hull City visit Old Trafford under new management after the sacking of Mike Phelan. The match is the […]