Manchester United Football Club takes on Manchester City in the third derby of the campaign. City won the first one at Old Trafford, with United claiming a victory in the EFL Cup meeting between the pair. The season-decider couldn’t be any more important, with a spot in the top four at stake.

Ahead of the game and despite our injury problems, we’ve decided to try and work out what starting line-up Jose Mourinho will go with.

In goal, David de Gea will keep his place after a relatively quiet afternoon against Burnley. There isn’t much choice in the way of centre-backs, so both Eric Bailly and Daley Blind will continue. Antonio Valencia and Luke Shaw will return to the starting line-up.

The midfield could be the key battle on the night, and the gaffer will go to the guys who have performed admirably recently; Ander Herrera, Marouane Fellaini and Paul Pogba. That’s presuming all are fit and ready to play, of course.

Pace on the counter attack could be key, hence why I think we’ll see Jesse Lingard and Henrikh Mkhitaryan get the nod. Marcus Rashford was rested at the weekend and he will definitely lead the line. 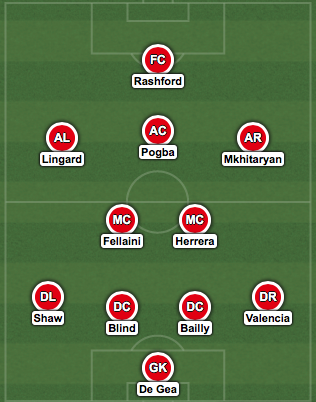 Manchester United take on Liverpool this weekend, in a fiercely contested fixture that historically produces goals galore. This game should be no different, with two sides who are struggling defensively at this current time.

Manchester United have been on a great run since the turn of the year, with Louis van Gaal slowly but surely winning some of the Old Trafford faithful back. That can continue this weekend if […]