Manchester United go into the weekend on the back of two consecutive home draws. Jose Mourinho’s side find themselves back in sixth position, and with games running out, our chances of finishing in the top four seem to be hanging on by a thread.

Next up, Sunderland away and a game against short-term Manchester United manager David Moyes. Our away form has been much more consistent this campaign which is slightly bizarre, and we’re desperate for three points here.

Ahead of the match, we’ve drawn up a probable starting line-up for the game and it looks supremely strong. Hopefully, it’ll have more than enough firepower to get the job done.

In goal, we have David de Gea as per usual. To be fair, he hasn’t had an awful lot to do recently. In front of him it’ll likely be Marcos Rojo and Eric Bailly who’ve both been wonderful this season. Antonio Valencia should come back into the team after a rest in midweek, with Luke Shaw finally getting the chance to prove his worth from the start.

Onto the midfield, then. Ander Herrera and Marouane Fellaini will play slightly deeper, giving Paul Pogba that freedom to move forward and play in an offensive role.

The front three looks pretty dangerous. Obviously, Ibrahimovic will lead the line and he should be feeling fresh after his domestic suspension. Henrikh Mkhitaryan and Jesse Lingard make up the starting XI. 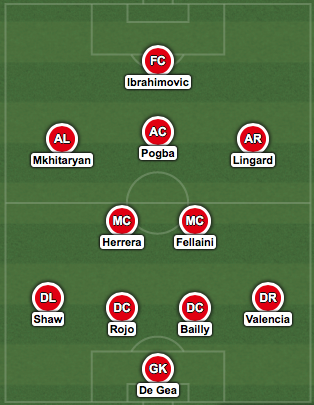 About Jordan Street 15651 Articles
I'm a 25-year old aspiring writer and I created the blog as a platform to discuss all things Manchester United. Season Ticket holder block E332.
Website

Over the course of the past couple of weeks, we’ve been trying to figure out a system which can accommodate all our Manchester United stars. Today we’re trying to incorporate as many of our best […]

Manchester United take on West Ham at Old Trafford this weekend, with Louis van Gaal hoping to get his side back to winning ways after a 1-1 draw away at Leicester last weekend. ahead of […]