Manchester United Football Club has had a tough week. All of the sudden, the Red Devils are five points off the pace in the Premier League, which simply has to be a concern to Jose Mourinho and the rest of the coaching staff.

However, the games are coming thick and fast now, so there is no time to dwell on what’s happened in the past. It’s up to the players to win their next game against Swansea City, in a Carabao Cup encounter. Ahead of that match, check out our predicted starting XI for the game. 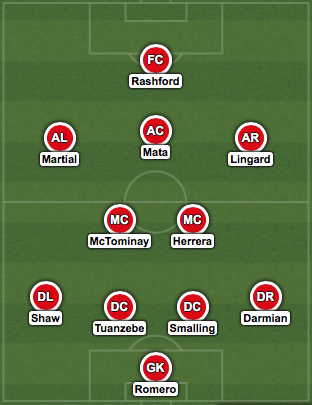 In goal, Sergio Romero will come back into the team. Chris Smalling will play, and I think we could well see Axel Tuanzebe get the start alongside him; following an awful outing from Victor Lindelof. Matteo Darmian will play as the right-back, with Luke Shaw occupying the left-back slot.

Scott McTominay is a talented lad, and with injuries absolutely decimating our midfield at this point in time, the Englishman deserves his chance to show us what he can do. Ander Herrera will continue, allowing Nemanja Matic to rest up for Tottenham Hotspur’s visit to Old Trafford on Saturday.

Juan Mata starts, as does Jesse Lingard. Finally, I think we’re going to get an opportunity to see Anthony Martial and Marcus Rashford play together. It has the potential to be a frightening partnership.

Manchester United head back to Old Trafford this weekend, after a couple of games away from home in succession. The Red Devils, take on Swansea City, with a chance to move up into the top […]

Manchester United made some ground on the likes of Tottenham Hotspur, Liverpool and Manchester City over the weekend, and now as we enter the festive period, the matches are coming thick and fast. Next up, […]