Manchester United progressed safely through to the FA Cup fourth round thanks to a comfortable victory over Derby County. Their prize? A trip to Yeovil Town; the lowest ranked side left in the draw.

Jose Mourinho’s men will be feeling in buoyant mood heading into the clash, boosted by the fact that Alexis Sanchez has been signed and no doubt the Chile star will increase our chances at winning major silverware come May.

Don’t be surprised to see the Red Devils field an almost full-strength side in this one. They haven’t played in almost a week, and Mourinho loves to go out and send a statement in these early rounds. 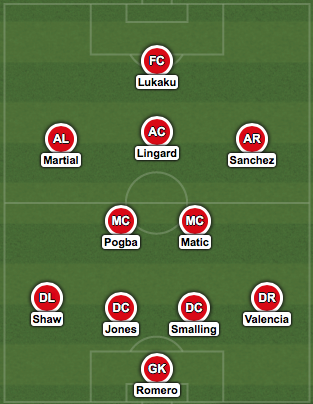 Anyway, onto the XI. Sergio Romero has never let us down as a back-up and I fully expect him to come into the line-up and have a good game here. Luke Shaw was rested last time out so no doubt he’ll play, with Antonio Valencia starting on the opposite flank. Phil Jones is in excellent form as is his defensive partner Chris Smalling. They’ll both continue to be named in the starting line-up.

Paul Pogba and Nemanja Matic is a partnership that seems to be improving week-on-week. They’ll both get the nod, as will Jesse Lingard who’ll start just ahead of the duo. Then we have the front three. Anthony Martial will play on the left, with Romelu Lukaku leading the line. New-boy Alexis Sanchez will begin his first game as a Manchester United player; and no doubt all eyes will be on him.

Manchester United have been given a glimmer of hope of finishing in an automatic spot into the Champions League group stage thanks to an Arsenal loss on Monday night. Now the two sides meet at […]

Manchester United Football Club are all set to play their first game in well over a month. Jose Mourinho’s men take on the LA Galaxy at the StubHub Center tomorrow evening, and it’ll be a […]